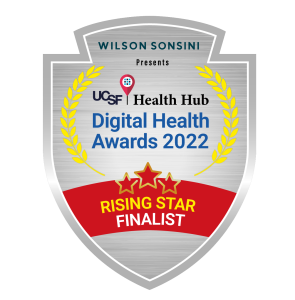 Eyenuk has been named a finalist in the Rising Star Clinical Diagnostic Tool category of the UCSF Digital Health Awards. Produced by the University of California at San Francisco’s UCSF Health Hub, Eyenuk was among over 1,500 disruptive companies from across the globe that entered 11 categories of this prestigious awards program. Winners of the award will be announced at the HLTH 2022 conference in Las Vegas, November 13-16.

“It’s an honor to be named as a finalist for the Rising Star Clinical Diagnostics Tool category,” said Kaushal Solanki, Eyenuk’s CEO and Founder. “It’s the second time this week that Eyenuk achieved a major milestone, validating our company’s mission to use AI technology to detect preventable, vision-threatening eye diseases which has been more than a decade in the making.”

The company announced on Monday that it secured a $26 million Series A financing round and will use the capital to expand its AI product platform with additional disease indications and advanced care coordination, and to accelerate the platform’s global commercialization and adoption.

Eyenuk is leading the way in harnessing the power of AI to eliminate preventable blindness globally, through its versatile digital health platform that enables automated AI diagnosis and coordination of care. Eyenuk’s flagship EyeArt® AI system has been more broadly adopted worldwide than any other autonomous AI technology for ophthalmology.

Since achieving FDA clearance in 2020, the EyeArt system has been used in over 200 locations in 18 countries, including 14 U.S. states, to screen over 60,000 patients and counting. It is the first and only technology to be cleared by the FDA for autonomous detection of both referable and vision-threatening diabetic retinopathy without any eye care specialist involvement.

Last month a major peer-reviewed study published in Ophthalmology Science, a publication of the American Academy of Ophthalmology, found that the EyeArt AI system is far more sensitive in identifying referable diabetic retinopathy than dilated eye exams by ophthalmologists and retina specialists.

Notice is always provided in clear and conspicuous language at the time of collection or as soon as practicable thereafter, but in any event before we use the information for a purpose other than that for which it was originally collected or processed by the transferring organization or before we disclose the information for the first time to a third party except where the third party is an agent as defined above.

Eyenuk's website uses cookies. A cookie is a piece of data stored on a site visitor’s hard drive to help improve access to the site and identify repeat visitors. The information collected from cookies may be used to monitor browsing preferences. Usage of a cookie is in no way linked to any personally identifiable information.Eyenuk's website also allows users to provide their e-mail address. Eyenuk collects e-mails in order to receive newsletter updates from the company. Your e-mail will not be shared with anyone outside of Eyenuk and Eyenuk business partners.

Eyenuk’s website also contains links to other sites. These links are provided for convenience only. The inclusion of any links does not necessarily imply a recommendation or endorsement of the views expressed by the sites to which the links lead. Please be aware that EYenuk is not responsible for the content or privacy practices of other sites. IDx encourages individuals to read the privacy statements of any other sites visited that collects personally identifiable information.

If Eyenuk wishes to use personal information covered by this policy in a manner that is incompatible with the purposes for which it was originally collected or subsequently authorized—or—if Eyenuk wishes to disclose the information to non-agent third parties, Eyenuk provides the opportunity to “opt out” of having data used or transferred in this manner, unless such a choice is not required by law. Individuals or partners may simply e-mail us at info@eyenuk.com to request that we do not share your information in this way.

Customers, business partners, and individuals have the right to access personal information, and to correct, amend, or delete the information if it is inaccurate or incomplete, except where the rights of others would be violated.

Eyenuk commits to providing access to your personal information whenever possible. Email Eyenuk at info@eyenuk.com if you wish to: